The project of a biodegradable temporary shelter called “Nziddha“ proposed by me and Fabrizia Parisi won the ideas contest “Nesting Paduli 2015 (original: Nidificare i Paduli)”!

The jury of the ideas contest “Nesting Paduli – 3rd edition 2015″ composed by:
– Rainer Toshikazu Winter, ECOFORM Laboratory Director (training school in self-building and sustainable architecture);
– Mariavaleria Mininni, Urban and Landscape Planning Teacher, Landscape Architect;
– Giuseppe Nicola Pacella, President of the Landscape Commission of Union of Middle Earth;
– Gabriele Petracca, Mayor of San Cassiano (head row of the municipalities that are part of the Park) and President of the Gal “Terre d’Otranto“;
– Gaetano Fornarelli, LUA Architect (Urban Open Laboratory);
selected among the works that took part to the contest “NZIDDHA”, presented by the group represented by Pietro Oronzo Di Chito, as winner of the 2015 contest edition. 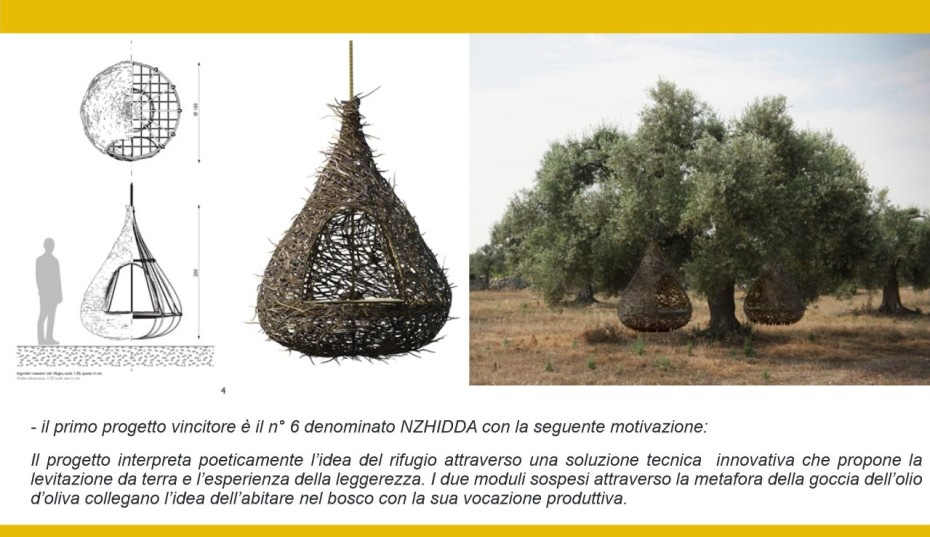 Nesting Paduli, 3rd edition 2015” (original: Nidificare i Paduli), is an ideas contest and a workshop based on self-construction and sustainable housing. It aims to collect contributions that experiment with, and,realise one of the guiding principles as nominated by the Integrated Program of Territorial Regeneration: a temporary hotel that is biodegradable and that can be diffused across the Paduli.

The contest is financed by the Puglia Regional Government’s Political Sector for the Promotion of Territory, Knowledge and Talent, the Fondazione con il Sud, under the GAP project Galleria d’Arte Partecipata: (the territory as a participatory art gallery), and in collaboration with the Urban Laboratory Abitare i Paduli, the Puglia Regional Government’s Department of Youth Politics and Social Citizenship and the Union of Middle Earth Municipalities (original: l’Unione dei Comuni delle Terre di Mezzo) (San Cassiano, Botrugno, Nociglia, Surano, Giuggianello, Supersano e Sanarica in the Province of Lecce).

The goal of the contest is to generate community involvement through the experimentation and application of best practice as related to hospitality and eco-sustainable tourism in the Park, to be achieved through creative activities and youth engagement in the context of the appreciation and development of the territory.

For more info, go to the portfolio.